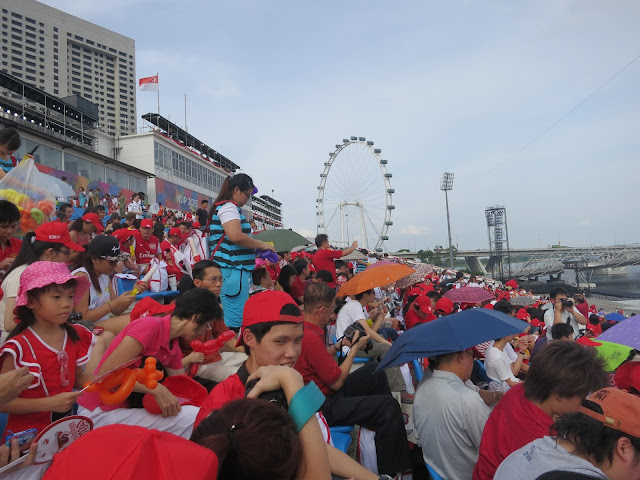 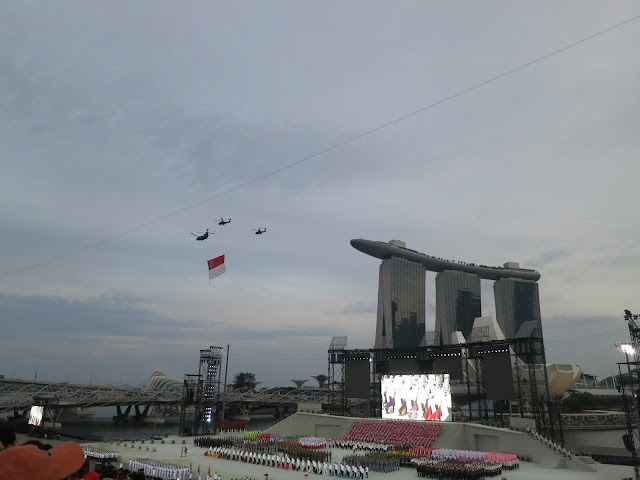 It's been so long since I last went to a National Day Parade and I'm really grateful to be given a chance to go. Thank you once again Lionel for the tickets!

Most of the pictures are taken by Allynn (and it'd be alot nicer then the ones I take) hence I'd share with you some videos of what you'd expect from this years' NDP 2013. Honestly, you should stay at home to watch it if you don't have the tickets. If you have the tickets, great! Cause it'd be really awesome. I especially like the "Merlion segment". Want to know what's the Merlion segment? Watch and you'd find out. :)

Basically the entire NDP this year has a very different "feel" from the previous years. The songs particularly were alot more hippy and trendy then the usual and they have loads of mini entertainment segments to keep you company before the actual parade starts. They have pop quiz where randomly they will zoom in to someone to ask them some questions. No prize for getting it right except you'd be on live broadcast. On several occasions the "kachangputeh man" will come out from nowhere and start throwing packets of peanuts for the audience. It's kinda fun even though the packets hit us on our heads by accident.

There were the usual march in, fighter jet planes.. Parachute was a little different because we have our first female parachutist! Pride to the women! Fireworks and the rest of the other animated or non-animated shows were great. ABTM were there too but a pity cause Tosh Rock wasn't there on the previews. (But I'm still happy to see Joshua & Weiliang)

I shall not spoil any further... Remember to stay home to watch!

Videos are all taken with my Canon S100, apologies if it's a little shaky or blur. It was filmed free hand. :) You can choose to watch in 720p too though.

This literally gave me a shock on the first gun salute so I didn't managed to film the first one.

Of course, the finale fireworks is the best.
Posted by Ranielle at 11:00 PM